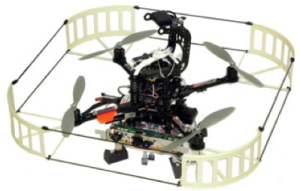 In 2007 we started working with quadrotors by using 3 AscTec Hummingbirds shortly after they became available. From the beginning, our research has focused on fully autonomous systems in indoor/GPS-denied environments without external sensors or computation. Since this required additional on-board sensors and computing power we got an AscTec Pelican quadrotor in 2010 because of its higher available payload.

The results of several projects using these MAVs with additional sensors and modifications have been published in a number of papers, e.g. an autonomous landing procedure by using a camera and a self-made optical flow sensor or one of the first autonomous indoor flights using a Kinect on the Pelican. This work has been conducted in close collaboration with Sven Lange and other colleagues at Chemnitz University of Technology. Check out their project website for up-to-date information.