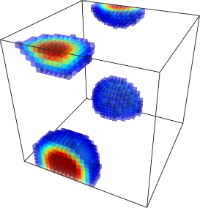 Since the 1970’s different types of neurons involved in spacial navigation have been identified in the brains of rats, primates and humans. Several experiments of different researchers show that these cells code the position and orientation of the animal in its environment. Neurologists and theoretical biologists have been developing models that help to understand the behaviour of animals as well as humans in different situations. These models explain the workings of the different cell assemblies and their connections with other areas in the brain.

We are interested in these developements and want to derive efficient algorithms that help solving navigation tasks and SLAM on autonomous mobile robots. Our goal is explicitly not to mimic the behaviour of the involved biological processes on the level of single neurons or even spike trains. Instead, we want to understand the principles behind these biological processes and project them onto higher levels of abstraction that are suitable for implementation and application on autonomous systems.